In front of the globalisation of the wine market, Europe bends but does not break

European wine consumption has fallen over these past years, like that of France, which is a third of what it was 50 years ago.

On the other hand, wine consumption has increased in the rest of the world, driven by the households of the two leading global economies—the United States and China.

Moreover, the latter will become the leading global consumer of wine before 2030 (ahead of the United States and France) and will drive global growth over the next 15 years.

However, production has increased for the first time in five years in certain regions. It is the case for some parts of Europe, notably in Spain and to a lesser extent, in Italy. We find the same trend in South Africa, Australia, in the US and even in Chile, countries where the producers of the famous “wines of the new world” are emerging.

In Europe, faced with the growing gap between supply and demand, the European actors are seeking opportunities in the rest of the world, but this new international situation will have different effects depending on the countries. If the French quality is still recognised throughout the world, the Spanish model, based on the massive production compared to farmable land seems vulnerable to international competition. 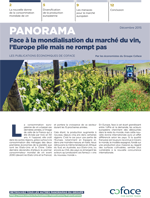 Download this publication : In front of the globalisation of the wine market, Europe bends but doe... (1.80 MB)