French companies in 2019: Rise in insolvencies but higher margins will allow cushioning the impact of slowing global trade

Rebound in insolvencies in the 3rd quarter

In the third quarter of 2018, after two years of improvement, French companies experienced a reversal of the trend with the number of insolvencies increasing by +2.3% (compared to the same quarter of 2017), in line with the slowdown in growth (1.6% in 2018) and consumption. Nine out of thirteen regions are affected, notably the Île-de-France region, which historically accounts for numerous insolvencies, but the extent of the rise has been limited by a decrease in PACA and Auvergne-Rhône-Alpes. At this stage, only micro-enterprises with revenues of less than EUR 500,000 are impacted. The fastest increases have been recorded in the sectors of transport (+19.7%), in particular taxis (+43%), and agriculture and fishing (+15.2%). Construction (+1.9%) and personal services (+8.8%), which together account for nearly half of all insolvencies, have suffered further deterioration.

Before this turnaround, since 2014 companies managed a return to profitability. At the end of September 2018, year-on-year, insolvencies dropped by -4.5%, their financial and employment costs fell by -5.4% and -4.8% respectively, confirming the improving health of the largest companies. Paradoxically, the increase in cost competitiveness (+5.5% between 2014 and 2016), attributable to the entry into force of the Competitiveness and Employment Tax Credit (CICE) and the reduction of employers' contributions under the Responsibility and Solidarity Pact, did not translate into better export performance.

France's export performance is all the more disappointing because it differs from the other major economies in the eurozone. Since 2014, Spain (+1.9%), Italy (+0.8%) and Germany (+0.3%) have seen their export performance improve while that of France has declined (-0.4%). However, the cost-competitiveness of these countries has improved far less (+2.2% in Spain, +0.9% in Italy), or even decreased (-0.3% in Germany).

2019: restoring margins would be an advantage to cushion the impact of slowing global trade

In 2019, Coface forecasts a rebound in the number of insolvencies in France of +0.8%, after a decline of -3.4% in 2018. GDP growth is expected to decrease to 1.5% in 2019, due to a deteriorating international environment, linked in particular to the rise of protectionism, and the persistence of supply constraints. The confidence index for construction, which is one of the indicators used by Coface in its model, should continue to decline as well.

Despite this reversal, the margin rate should remain stable at a comfortable level in 2019 and allow companies to mitigate the effects of the slowdown in world trade, or even achieve export performance gains. The measures contained in the 2019 Finance Bill should not have a significant impact on the health of companies. The negative net effect of the Competitiveness and Employment Tax Credit (CICE) switching to a permanent decrease in employers' charges, due to the consequent increase in taxable corporate profit, should be offset by the continued rise in productivity. 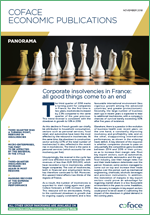 Download this press release : French companies in 2019: Rise in insolvencies but higher margins will... (354.05 kB)