Coface accelerates its profitable growth in 2011

Coface Group's financial performance in 2011 proves the pertinence of the strategic refocusing on credit insurance initiated at the beginning of last year. Despite the degrading economic context, the commitments aiming for profitable and autonomous development, made at the time of the strategic reorientation, were kept and are bearing their fruit:

"Refocusing on our core business and our company project “Strong Commitment” have put coherence and pragmatism back at the centre our organisation. We are even more focussed on accompanying our clients, providing them with increased exposures despite the difficult economic situation, due to our refined risk expertise. Our performance in 2011 proves that Coface has never been more solid to handle future economic challenges” declaredJean-Marc Pillu, Chief Executive Officer of Coface.

2011 confirms an acceleration in the turnover for Coface's strategic entities, showing an exceptional growth of + 7.4% compared to 2010, which is above the average of 5% recorded for more than 5 years.All geographical platforms are contributing to this growth. Growth is particularly marked in the emerging markets: in Latin America (+11.4%) and in Asia and Pacific (+12.4%) where Coface is number 1, as well as in Central Europe (+20.2%). 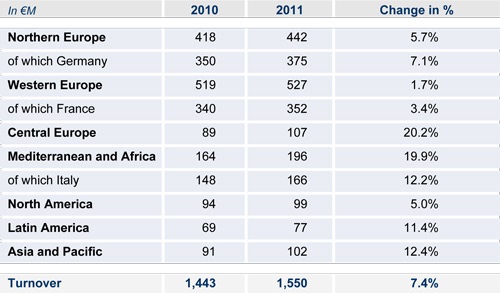 Insurance is enjoying substantial development, benefitting from a sustained commercial activity, a new record production (€200 million) and with a remarkable client retention rate of 91%, in progression compared to 2010 (86%)  Factoring, continues to register solid growth (+11,8%), due to its good synergy with credit insurance. This activity is refocused on Germany and Poland, countries where Coface is number 1 and 2 respectively.

Since the turnaround in the business cycle that occurred in the second quarter of 2011, Coface has observed a net break-off in the payment behaviour in companies with a tangible increase in non payments. Over all of 2011, Coface recorded a 27% increase in payment incidents in the world, with a particularly marked increase of 47% for Southern Europe businesses.
Despite this situation and due to its expertise, Coface set up a refined management for risks which allowed to support the strong commercial development of its policyholders. This is proven by the increase in overall exposure of 15.6% in one year, the double of the rise in premiums. The net loss ratio was therefore stabilised at 57% and remains very close to that of 2010 (57.2%).
The net cost ratio stands at 25.2%, a 2.5 point improvement, in particular due to rigorous management of costs.  Consequently, the net combined ratio stands at 82.2%, compared to 84.9% in 2010.

In a context of strong tension in the financial markets linked to the debt crisis in the euro zone, the investment portfolio had financial income of €37 million, which is a performance of 1.9% for the average exposure.
Operating profit grew sharply, reaching €207 million, up 17.6%.  Current net profit stands at €121 million, up 21% compared to 2010.

The effectiveness of Coface's new model is benefitting from the strengthening of its financial solidity. The shareholders’ equity reached €1,465 billion, up 5.7% compared to the end of 2010. This increase is accompanied by a reduction in the indebtedness ratio, which changed from 43% at the end of 2009 to 1% at the end of 2011.  The ratings assigned to Coface by Fitch (AA- with a stable outlook) and by Moody’s (A2 with a stable outlook) have been confirmed, as such reflecting Coface's solid competitive position in the worldwide credit insurance market.

Coface's strategic refocusing was accompanied by the launching of the company's "Strong Commitment" project which places profitable and autonomous growth at the centre of the Group's focus. It declines in many projects for optimising organisation and procedures which will be achieved in 2012, therefore contributing to an improvement of services offered to the clients, the control of the combined ratio and the improvement in the Group's performance.
In February 2012, the French state renewed for a four year period the financial agreement which stipulates the procedures for the management of public guarantees for export for Coface. This sign of confidence shows the quality of service that Coface provides to French exporters and to banks which support them in exporting.  Coface recently signed a securitisation programme with four leading banks, allowing the Group to raise up to €1.1 billion. This operation, based on the stock of Coface Finanz receivables, will contribute to the safety of Coface's refinancing and therefore to the sustainability of its factoring business.