After a post-crisis readjustment between advanced and emerging countries, in 2014 global country risks are set to change in line with a more classic model. In advanced countries, risks are stabilising, buoyed by fairly dynamic growth in the US (estimated to be +2.4% in 2014), the start of a recovery in the eurozone (+0.9%) and confirmed growth in Japan (+1.4%). As for emerging countries, the rate of growth will increase only slightly (+4.7%) and will remain below the average for the 2000-2011 period.

The recovery in advanced economies is marked by divergences between countries. The situation of businesses in the US (A2 assessment under positive watch since October 2013) has considerably improved. "Corporate America" is the strong link in the economy and has a number of strengths: high level of self-financing, record profitability, low debt and strong investment. Clearer budget and monetary policies and growth in household demand boost this positive trend.

In Europe, Coface notes risk improvement inGermanyand inAustria(+1.7% growth forecast for the two countries in 2014), for which the A2 assessment is now accompanied by a positive watch. German economic activity is highly vulnerable to the vagaries of global trade, but it can now rely on household consumption. Company insolvencies are less numerous and costly (for the last year, -9.1% in number and -6.3% in financial cost [1] ). This upturn in activity benefits Austria, where unemployment is low and the number of insolvencies is falling.

Among the European countries to have succeeded in reforming and lowering costs,Irelandstands out: growth of +1.7% is expected in 2014, with a rise in exports (which benefit from US and British growth), retail trade, and increasing business and household confidence. The major challenge of the past year, the employment market has begun to improve, and property prices  show the first signs of stabilisation. These successes have led Coface to upgrade Ireland to A3, the same level as France and the UK.

The diagnosis is more mixed for the rest of the eurozone. At least we can say that risks have ceased to increase. In France, because they have failed to reduce costs significantly, companies remain extremely vulnerable to the fluctuations of domestic demand, which is still very lacklustre compared to the historical average (+0.6% growth forecast in 2014). The consequence of this vulnerability is that insolvencies will remain high at around 62,000 in 2014. In Southern Europe, the weakness in domestic demand, the domination of entrepreneurial activity by very small, fragile companies coupled with a lack of innovation, prevent credit risk from improving. In addition, there is a high level of corporate debt, such as in Spain.

The slowdown in growth has taken root in emerging countries: in 2014, the BRICS countries will shed 2.4 growth points compared to the average growth in 2000-2011. According to Coface, this is not due to a simple cyclical downturn but related to supply constraints (household demand is too high for local production which can no longer keep up). Investment faces obstacles of a structural nature: inadequate infrastructure, problematic business climate and shortage of skilled labour. In addition, the weakening of local supply fuels imports and thus current deficits will remain high in 2014. Exchange rates will therefore be vulnerable, all the more so since Brazil, India, Turkey and South Africa are due for major elections in 2014.

Four countries in Sub-Saharan Africa are not subject to this new increase in risk. Despite a volatile security situation, Coface places a positive watch on the D assessment ofRwandaandNigeriaand C assessment ofKenya. TheIvoryCoastis upgraded to C. Growth should remain strong in 2014, maintained by sector diversification which benefits the consumer.

"Reducing risk in advanced countries is confirmed and illustrated by the positive trends in two major economies; the US and Germany. Both countries benefit from the financial robustness of their businesses and a recovery that is now based on firm foundations. As regards the other major European players, the end of the recession means a stabilisation in risks for the time being. But we expect growth to be sluggish. In fact, it would require growth of at least +0.8% in Italy, +1.6% in France and +2.5% in the UK for insolvencies to fall significantly. However, in all three economies the growth expected in 2014 will not reach these levels. In emerging countries, current account deficits and growth weakened over the long-term, burden companies. But fortunately the emerging world is different: a new generation of countries is characterised by its resistance to external shocks, including at the fore, many Sub-Saharan African economies," says Yves Zlotowski, Chief Economist at Coface.

[1] Financial cost is measured by supplier and bank debts 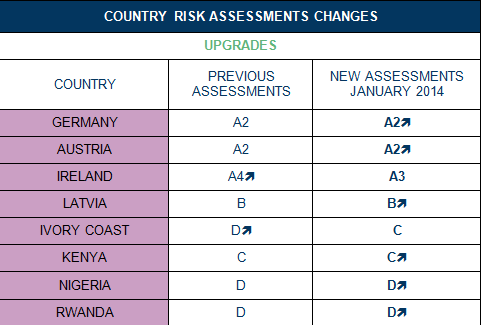