The gentle slowdown continues under a risky external environment

After a couple of years of robust expansion, the Portuguese economy will continue its decelerating trend in 2020. The main factor behind the slowdown is the gradual degradation of the external environment and its spillover effects on domestic consumption. Growth in private consumption will go from 3% in 2019 to 2% in 2020, losing steam as the tourism boom moderates. More broadly, export growth will stagnate at 4% in 2020. The export basket is relatively diverse but with modest value added, specializing in vehicle assembly, oil refining, electrical components, shoes and wine. Furthermore, both private and public investment are expected to grow more slowly, due to the government’s failure to maintain the public capital stock. Nonetheless, Portugal will continue to be one of the best-performing economies in the region, with the good health of the Spanish economy helping to weather the European downturn. Overall, the outlook remains encouraging but is subject to important downside risks. With the UK being the first tourism market, a disorderly Brexit could substantially depress 2020 tourist arrivals. The private sector has continued to deleverage, but with household and corporate debt at 70% and 130% of GDP, respectively, demand remains vulnerable to shocks. Similarly, bank capital and asset quality has continued to strengthen but the non-performing loan ratio remains high by Eurozone standards (9.4%), only behind Cyprus and Greece.

Unburdened by the costly bank recapitalizations that had weighed on expenditures in recent years (Caixa Geral de Depositos in 2017 and Nova Banco in 2018 and 2019), the government should be able to post a neutral public balance or even a small surplus for the first time in decades. Despite the economic slowdown, the labor market will remain in good health with unemployment continuing to decrease, thus yielding a steady stream of social contributions to support revenue. Reducing the country’s considerable public debt has been a priority for the centre-left coalition and this will continue in its second mandate, as the debt ratio is expected to decrease further in 2020. Given the continuation of ultra-low interest rates, public debt could be brought down to 100% of GDP by 2024 if growth stays close to potential (1.4%). However, slashing the deficit in recent years has come at the expense of maintaining the quality of infrastructure. At 2% of GDP, the level of public investment is among the lowest in the Eurozone and insufficient to counteract the erosion of the public capital stock, which has suffered a net depreciation of 1% of GDP every year since 2016. Otherwise, expenditure is mainly driven by the wage bill (11% of GDP) and social benefits (18% of GDP). The wage bill has grown mechanically on the back of the removal of pay freezes and the extension of the work week, and the pension system is the 6th most generous in the OECD. With the post-crisis labor cost devaluation process moderating, the country is again posting current account deficits. However, they are small (-0.7% of GDP) and financed through FDI and capital transfers rather than hot debt flows as was the case in the pre-crisis period. The service surplus, underpinned by tourism, is the main source of receipts counterbalancing trade and income deficits caused by domestic consumption and the service of foreign debt.

The centre-left coalition gets a second mandate

On October 6, the Socialist Party (SP) capitalized on a prosperous first term in office by becoming the largest party in Parliament in a general election marked by a record-high abstention rate (45%). Led by incumbent PM Antonio Costa, the centre-left party carried 36.7% of the vote and secured 106 seats out of 230 in the unicameral legislature, up from 86 in 2015 but 10 short of an absolute majority. Furthermore, the SP will ostensibly carry more leverage within the governing coalition, as it now only needs the support of one of the two hard-left parties, the Left Bloc (BE, 19 seats) and Communist Party/Greens (UDC, 12 seats). Meanwhile, the mainstream right parties – the Social Democratic Party and the People’s Party – saw their combined share of the vote decline from 39 to 32%. Costa has reiterated his commitment to reducing the debt, but less growth will mean a more challenging second term. The electorate seems satisfied for now, but the high abstention rate signals that there is a potential reservoir of frustrated voters. Should the SP lose popular support, the incentives holding up the coalition could shift. So far, it has been expedient for the far-left to associate itself to the government’s successes. But, if and when a SP-led government stops delivering results, the BE and the UDC could hope to capitalize on voter dissatisfaction to pull the political landscape further to the left. However, this scenario would need the materialization of global risks.

Cheques are frequently used in Portugal and it is common practice to establish payment plans with post-dated cheques which are payable on presentation. If the bank account is not sufficiently provisioned, they are borne by the bank up to a maximum amount of €150. In the case of bounced cheques, an individual person or a company is prohibited from receiving or issuing further cheques for a maximum term of two years (or eventually six years, if there is a court decision).

Bills of exchange are commonly used for commercial transactions in Portugal. In order to be valid, they are subject to stamp duty, the rate of which is set each year in the national budget. A bill of exchange is generally deemed independent of the contract to which it relates.

Cheques, bills of exchange, and promissory notes offer effective guarantees to creditors against defaults, as they are legally enforceable instruments which entitle debt holders to initiate “executory proceedings”. Under this process, creditors can petition the court to issue a writ of execution and notify the debtor that this has been done. When debtors still fail to settle their debts, the creditors may request that the court officer issues an attachment order against the debtors’ property.

Electronic transfers via the SWIFT network are widely used by Portuguese companies and are a quick, reliable and economic means of payment. If the buyer fails to make a transfer, the legal recourse is to institute ordinary or summary proceedings, based simply on an unpaid invoice.

In the event of a payment default, creditors are not required to issue a protest notice before bringing an action to court, but such a notice can be used to publicise the matter and thus put pressure on debtors to honour their obligations, albeit belatedly.

Amicable collection begins with the debtor being sent four demands for the payment of the principal amount. Interest on the principal can be requested, but is normally difficult to collect in Portugal. Payment agreements subsequently made between creditors and debtors can include guarantees to ensure payments will take place as agreed.

Interest rates are set by the Treasury Department. The rates are published in the Diário da República during the first fortnight of January and July each year, and are applicable for the following six months. These interest rates are applied by default, unless the parties involved in a commercial agreement have contracted otherwise.

The order to pay procedure (Injunção), which is applicable to uncontested commercial claims, was established in March 2003. These proceedings, whatever the amount involved, are heard by the court in whose jurisdiction the obligation is enforceable, or the court where the debtor is domiciled. Since September 2005, these injunctions can also be served electronically.

The National Injunctions Office (Balcão Nacional de Injunções, BNI) has exclusive jurisdiction throughout the country for the electronic processing of order to pay procedures.

In cases of disputed claims, creditors can initiate formal, but more costly, declarative proceedings (acção declarativa), to obtain a ruling which establishes their right to payment. Once the claim is filed with the court and the debtor notified, a defence can be filed within 30 days. Failure to reply entitles the court to deliver a default judgment. If the judge rules in favour of the creditor, the court may order damages, if requested by the demanding party. They then need to initiate “executive proceedings” (acção executiva) to enforce the court’s ruling.

Under the revised Code of Civil Procedure, any original deed established by private seal (i.e. any written document issued to a supplier) in which the buyer unequivocally acknowledges his deb, is deemed to be an agreement that is enforceable by law. Since 2013, when the most recent revision of the Code of Civil Process was made, written signed payment plans can only be used to initiate executory proceedings when they have been recognised by a notary.

In the scope of the recent restructuring of Portuguese courts which has been ongoing since 2014, more courts specialising in commercial issues have been created. The number of Courts of First Instance has been reduced to 23 (in each district capital), while there are now 21 specialised courts (Secções de Competência Especializada) for commerical issues (secção de Comercio), commercial issues. These latter sections deal specifically with insolvencies and commercial company matters. During this same period, 16 sections specialising in Enforcement Procedures (Secções Especializadas) have also been created.

Once all avenues of appeal have been exhausted, a judgment normally becomes final and can be enforced. If the debtor fails to comply with the decision, the creditor can request compulsory enforcement mechanisms before the court – either through an Attachment Order, or by allowing payment of the debt to be obtained from a third party which owes money to the debtor (Garnishee Order).

A special extrajudicial administrative procedure (Regime Extra Juditial de Recuperação de Empresas, RERE) came into effect on July 1, 2017. This procedure for restructuring company debts is carried out by specialised mediators. It has been designed to enable creditors and debtors to reach a compromise, in a confidential and consensual manner.

The reforms implemented in 2012 included the introduction of a special rescue procedure (Processo Especial de Revitalizaçao, PER). The aim of this new procedure is to ensure the recovery of debts from debtors that are in a ‘difficult economic situation’ without starting an insolvency procedure. The management is obliged to request permission from the provisional judicial administrator in order to perform “particularly relevant acts”. During this process, the administrator prepares a recovery plan which must be approved by the creditors and a judge.

Insolvency law in Portugal also provides for insolvency proceedings (Processo de Insolvência). The main goal of these proceedings is to obtain payment for the company’s creditors through the implementation of an insolvency plan. Insolvency plans can be established under which the company is restructured and can continue to operate. Should this prove unfeasible, the insolvent’s estate is liquidated, and the subsequent proceeds are distributed among the creditors. 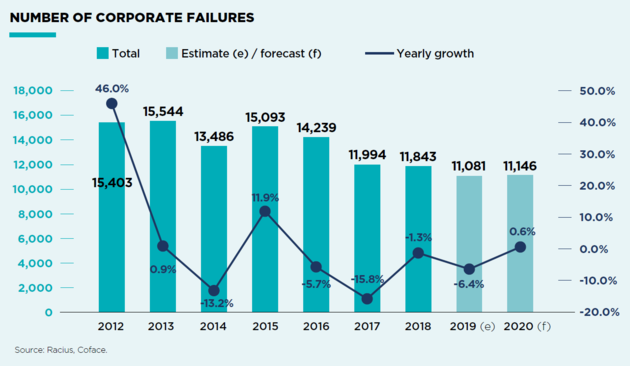